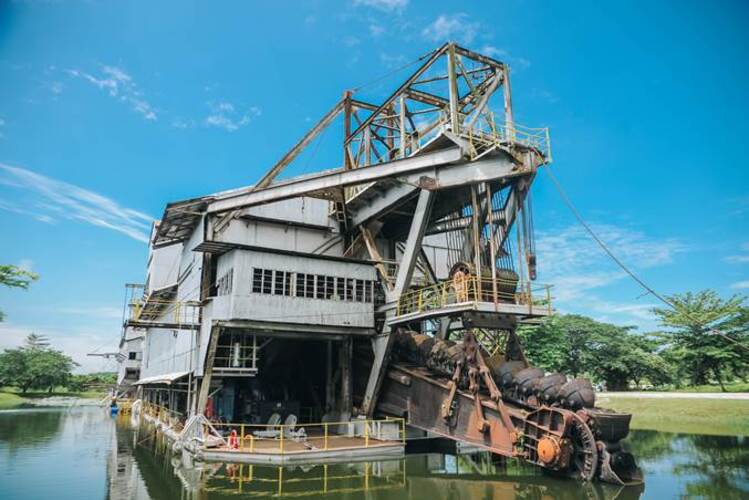 The legacy of the tin ore industry in Perak can be seen through the valuable dredger known as "Tanjung Tualang Tin Dredge No.5 (TT5)". This medium-sized, 4500 tonne dredger is still floating as same as the first year it operated, 1938. TT5 is the only dredger that has been restored and opened to the public since 2017. TT5, built in England by F.W Payne & Son, was later bought by Southern Malayan Tin Dredging (SMTD) a British company that was rapidly digging for tin around the Kinta Valley. Initially TT5 relied on steam power to operate until in 1963, large-scale improvement works had taken place in which, electric and diesel was used to generate the TT5 power to run the operation 24 hours per day, 7 day per week. A total of 20 workers including dredge master, chargeman, chief and regular workers are required for one shift to work for 8 hours. After 44 years of mining from Teja, Gopeng to Tanjung Tualang, area by area, TT5 had to closed down in 1982 due to collapse of the world tin market. 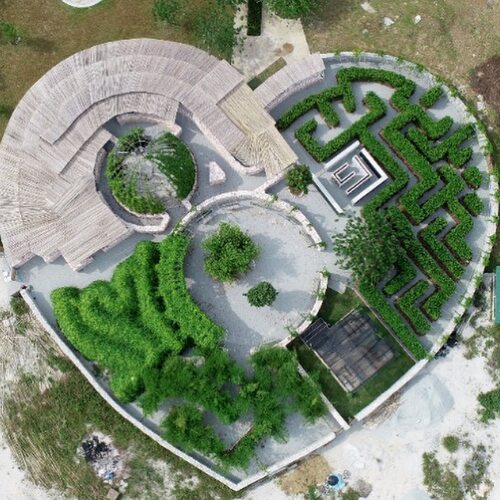 TT5 Maze Park specially design for education and enjoyment while having a family time.  Suitable for all ages, it provides hygienic playground and open-concept petting zoo for children, while creating 50s era as a theme for the railway café to be enjoy and relax by parents. The main attraction at TT5 Maze Park is the first heart-shaped maze in Malaysia.  32000 sqt with 750 meters to be explore, TT5 Maze Park offer 8 elements such as Stone Maze as a walkway, Stone Gallery to educate about types of stone, Bengal Tunnel to get an extra oxygen, Bamboo Maze, Art Gallery which interpret tin mining history thru paintings, Bunny Maze, Recycle Maze that made up from glass bottle as wall and used shoes to plant flower, lastly Muraya Maze as the elements before step out. Admission to the TT5 Maze Park is granted via the purchase of tickets, that also includes a postcard that can be dropped off in a colourful mailbox located in the heart of the maze. TT5 Maze Park will give tourists alike an opportunity to learn about the rich diverse history of Tin Mining forgotten industry, while providing hours of fun and engaging activities for all walks of life.